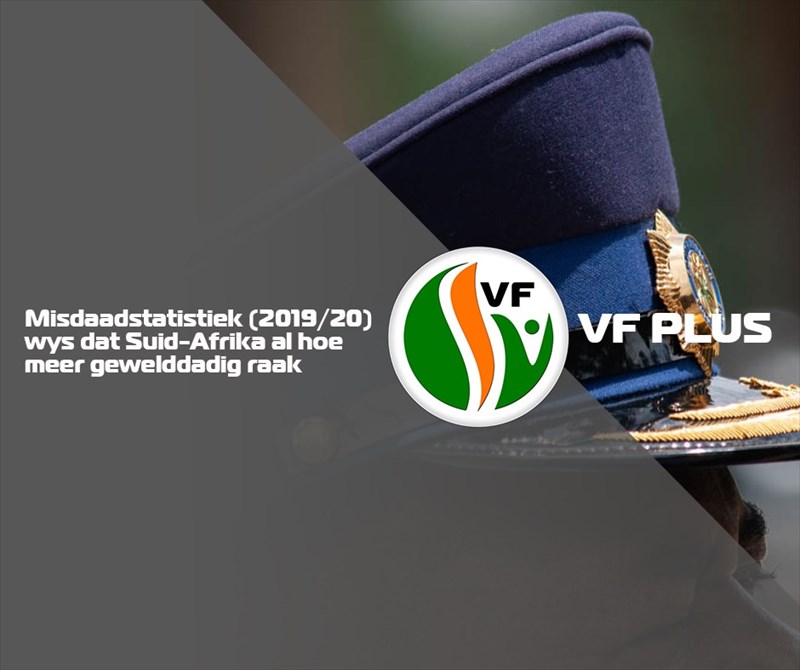 The latest crime statistics (2019/20) show that South Africa is becoming more and more violent as 21 325 murders were committed during the specific period.

Robbery (common) has also increased to 51 825 incidents and robbery with aggravating circumstances to 143 990. The latter recorded an increase of 2,8% in comparison to the previous year.

These statistics clearly show that South Africans are living in an unsafe and downright dangerous environment. A total of 1 061 people were murdered during robberies at residential premises, business premises and on the street, while there were also 2 842 attempted murders during these incidents.

The police now annually release statistic on farm murders. The latest statistics indicate that 49 farm murders were committed during 46 incidents.

The FF Plus has questions about the figures as the total number of attacks were not mentioned. The leader of the FF Plus (Dr Pieter Groenewald) asked the Police Commissioner, Gen. Kehla Sitole, to include the number of attacks in the future and he agreed do to it.

According to Commissioner Sithole, the police service has started a process to involve the community in rural safety. It includes agricultural associations and neighbourhood watches. The FF Plus welcomes this approach. The party had suggested it as part of the solution some time ago already.

Considering the seven categories of contact crimes committed against people, there are only two of the categories, namely attempted murder and assault to do grievous bodily harm, that recorded a decrease.

This is the third consecutive year in which the categories show an overall increase and it points to the violent nature of our South African society. It also serves as proof that people have good reason to feel unsafe in the country.

These figures could, however, only reflect a decrease in the number of cases that are reported, especially as regards sexual offences. The possibility that the figures could be misleading with regard to these types of crimes must not be overlooked.

There are a lot of shortcomings in determining the true extent of these categories of crimes seeing as in many cases, incidents are reported to police stations but they are not duly recorded.

The FF Plus is, thus, calling on the government to have an independent body perform a thorough audit of the crime statistics to ensure that it provides a true reflection of the crime situation in South Africa.