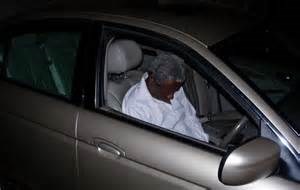 After nine years, judge Nkola Motata, who was found guilty of drunken driving, is still on special leave with full pay and has cost the taxpayers of South Africa nearly R14 million since the start of his special leave in January 2007, Dr. Corné Mulder, FF Plus chief whip, says.

The minister of Justice and Correctional Services, Michael Masutha, has confirmed this information in a reply to a parliamentary question of Dr. Mulder.

Motata was found guilty of drunk driving by the Johannesburg High Court in 2009 and was sentenced to a fine of R20 000 or twelve months imprisonment.

It now appears that the legal process against Motata has still not been finalised and that it was extended in the past nine years with various legal actions based on technicalities by the suspended judge. The matter is currently before the Judicial Conduct Tribunal.

Minister Masutha stated in his reply that judge Motata’s special leave is not subject to him paying back a portion of his salary should the Judicial Conduct Tribunal find him guilty of gross misconduct.

Dr. Mulder says it is a disgrace that the process was allowed to be indefinitely protracted while the public of South Africa has to pay to allow a guilty person to live in luxury.

“The FF Plus will now put pressure on the Judicial Conduct Tribunal to finalise this matter without delay, and insists that Motata pays back a part of his salary,” Dr. Mulder said.

Dr C P Mulder (FF Plus) to ask the Minister of Justice and Correctional Services:

(1) Whether a certain judge (Judge Motata) is still on special leave with full pay; if so, (a) why has the hearing of the specified person not yet been concluded and (b) what steps will be taken to conclude the hearing;

(2) whether any of the monies are repayable if the specified person is found guilty; if not, why not; if so, what are the relevant details?

(3) what is the total amount that has been paid to the specified person since being placed on special leave in 2007; NW2443E

(1) (a) Yes, Judge Motata is still on special leave with full pay.

(b) The complaints that were lodged against Judge Motata were referred by the Judicial Service Commission to a Judicial Conduct Tribunal to be investigated and reported on. The proceedings by the Judicial Conduct Tribunal were kept in abeyance following a series of legal challenges relating to the constitutionality of section 24 of the JSC Act which empowers the Tribunal President to appoint a member of the National Prosecuting Authority to collect and adduce evidence on behalf of the Tribunal. Following the conclusion of the legal challenges at the Constitutional Court, Judge Motata launched his own application challenging the constitutionality of the amendments passed by Parliament in 2008 which brought about the complaints handling mechanism against Judges. This application has resulted in the proceedings at the Judicial Conduct Tribunal being postponed until the finalisation of Judge Motata’s application.