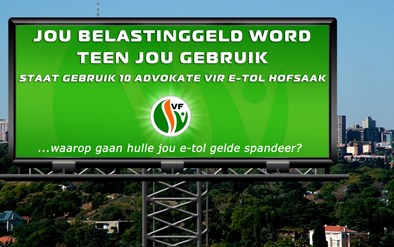 Despite the fact that the E-Toll Act, in the midst of growing public resistance, will be implemented from tomorrow, the Freedom Front Plus and its partners’ application to prevent the implementation of the act through an interdict have been unsuccessful after the court found that the application is not urgent enough, Adv. Anton Alberts, the FF Plus’ parliamentary spokesperson on Transport says.

According to Alberts, Judge Mabel Jansen of the North Gauteng High Court did not make a decision about the unconstitutionality of the E-Toll Act although this had formed the basis of the Toll Road Action Group’s (TAG) application.

In her judgment, Judge Jansen said amongst others that there is no harm which cannot be corrected at a later date, Adv. Alberts says.

“The FF Plus does not agree with this at all. We contended that the Act itself and the implementation thereof are unconstitutional. This formed the basis of our application and was not contested in court.

“In effect it means that an act which in our opinion is unconstitutional will be implemented within hours from now. Billions of rand are involved here and the impact on road users and the region’s economy will be enormous.

“How the court could in the light of this decide that the application isn’t urgent, is incomprehensible. We are expecting even stronger opposition from the public who will also have to pay for a system and an act to which they are unlawfully being subjected.

“We are at present busy considering the decision. The opportunity is still there to place the case on the ordinary roll where there will not be any question about urgency. We nevertheless expected the court to act more sternly toward the state given the seriousness of the application.

“We are also disappointed about the costs order. This means that institutions which act in the public interest against the abuses of the state have to pay if the decisions are made against them. This is not good for the rights of a country’s citizens in a democratic dispensation.”

Regarding the late application, Adv. Alberts said it was not done purposefully.

“Behind the scenes we have been involved in an exchange of letters with the president about the issue in which we had, amongst others, requested him to make his legal opinion about the Act available to the FF Plus.

“There was no attempt from the office of the president to react to this or to answer urgent questions about the constitutionality of the Act.

“After the early date for the implementation of the system had been announced, we had no other choice but to bring an urgent application before the court,” Adv. Alberts said.