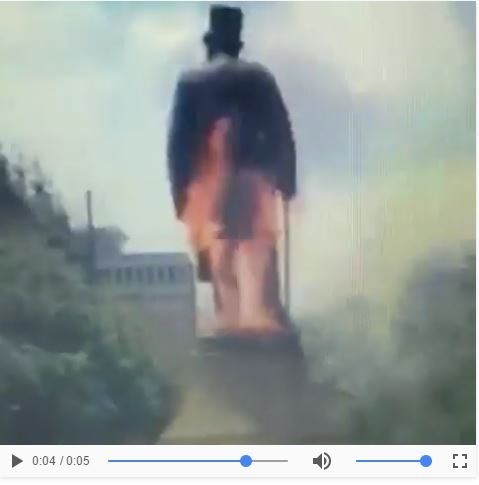 The EFF as a political party must be held accountable for the damage caused to businesses and the statue of Paul Kruger in Pretoria today, Dr. Pieter Mulder, leader of the FF Plus says.

Dr. Mulder says there can be no doubt that it had been EFF members which had caused the damage. There are enough video evidence and eye-witnesses to confirm this. Where organisations had in the past had gotten away by giving unidentified individuals the blame for damage caused, it is not the case here.

“It is clearly visible on video material how an EFF member in a red uniform hurls a fireball at the Kruger statue and how shops are plundered by EFF members.

“At the same time, it has to be determined what was said during the EFF leader’s speeches and whether it had contributed to the violence.

“Violence and causing damage during protest actions are criminal offences and individuals who are guilty of it must be arrested and treated as criminals.

“Failing action of the police, the FF Plus would like to encourage private owners and businesses and organisations which had suffered great damages to their properties today to lay charges against the EFF, hold them accountable as a political party and recover the damage from the party.

“It may contribute to stopping protest actions which are always accompanied by violence,” Dr. Mulder said.