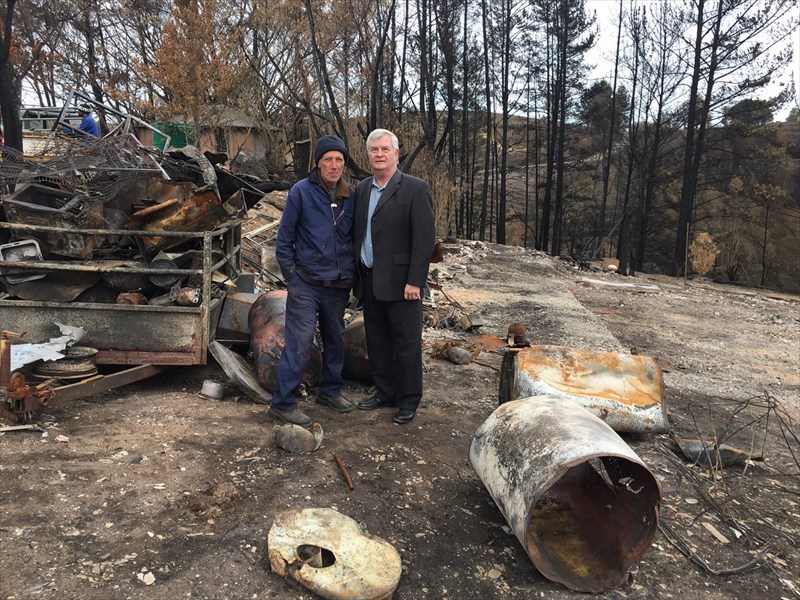 Today, Dr. Pieter Groenewald, leader of the FF Plus, visited the fire stricken areas in the Southern Cape and spoke to, amongst others, some of the victims, the police and the organised farming community. Here are his impressions:

“A visit to the fire stricken Knysna and surrounding areas really drives the scope of the disaster and the damage home. It is shocking to visit people that are standing next to their house that has literally burnt down to its foundations and whose charred belongings are good for nothing but the rubbish dump.

I feel like the victims have shown great perseverance and have starting rebuilding from scratch what they have lost.

From conversations I was able to glean that the people are very grateful for any help from institutions and fellow South Africans. When talking to a representative from the Lions Club, he mentioned that people’s pride often keep them from asking for help even though help is available.

The devastation did not only affect the humans, but also the animals and it is very clear that fire does not make any distinction between rich and poor.

A lot of help is still needed. The farmers, especially, need feed for their animals. For that reason, the FF Plus has decided, in cooperation with the Plettenberg Bay Farmer’s Association, to ask the public to make generous financial contributions that will help cover the Association’s costs of transporting animal feed to the area.

It truly is quite an emotional experience to speak to people that still have hope for the future despite the total destruction of all their earthly possessions. The FF Plus can only wish them all the best.

Various conversations hint at the fact that the origin of the devastating fire was a smouldering fire that was not properly attended to by the Sedgefield municipality, as was reported in the media. An additional problem was the strong winds that uprooted trees that, in turn, fell on power lines and consequently caused fires.

The FF Plus recommends that Eskom switches off the power supply during such stormy conditions as an emergency measure, especially in the areas where there is a great risk for fire.

I also visited the police and was informed that a team has been put together to investigate the matter. The possibility of arson will also be investigated. Because people have lost their lives as a result of the fires, cases of culpable homicide have been opened and are being investigated.

The FF Plus will contact the local government and recommend that it liaises with organisations like the farmer’s association regarding matters like fire prevention so that similar disasters can be prevented in the future.”