Home | Latest news | Good and bad news in Budget Speech, but money is still being thrown down bottomless pits like the SAA and the Road Accident Fund

Good and bad news in Budget Speech, but money is still being thrown down bottomless pits like the SAA and the Road Accident Fund 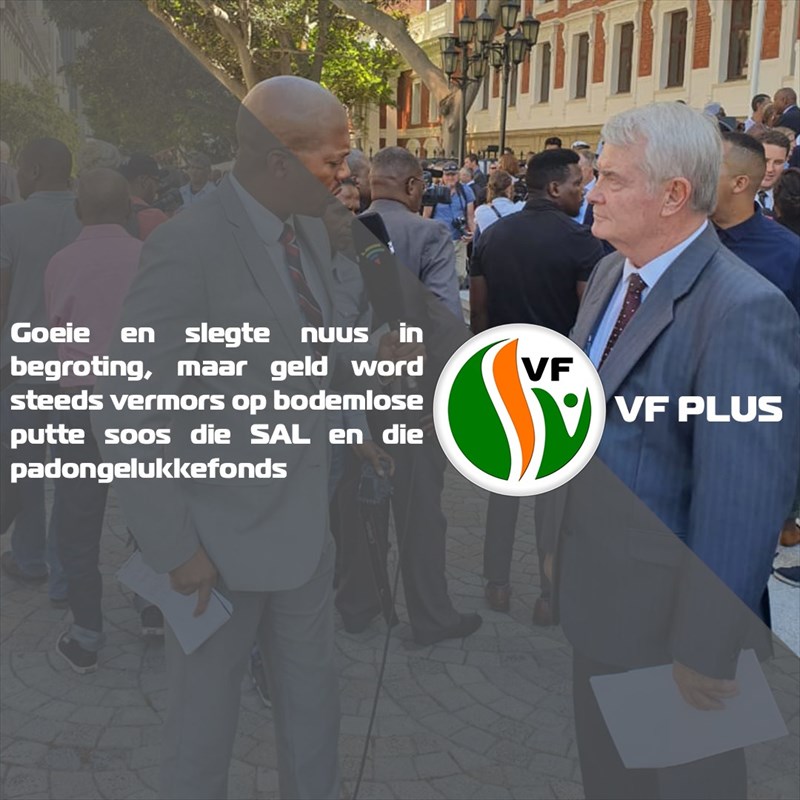 The FF Plus welcomes the announcement made by the Minister of Finance, Tito Mboweni, that there will be some relief for taxpayers, particularly as regards the adjustments in tax brackets for personal income tax.

It will offer taxpayers much-needed relief seeing as it will raise many people's disposable income, which means that more money will be injected into the economy and that, in turn, will stimulate growth.

On the negative side, it is disappointing that the fuel levy will be increased and that a golden opportunity to close and privatise a struggling state-owned entity, like the SAA, was once again not made use of.

The fuel levy hike of 25 cents includes an increase of 9 cents per litre for the Road Accident Fund, which is unacceptable seeing as the fund is a total failure.

The FF Plus proposes that compulsory third-party insurance for all vehicle owners should be implemented instead of investing even more money in the failed Road Accident Fund.

The Minister has taken away certain incentives for companies which will have a detrimental effect on the manufacturing sector in particular, but he announced a continuation of positive incentives, like another tax benefit for the industrial sector.

The fact that the budget deficit is becoming even greater is not good news. South Africa's expenditure is exceeding its income all the more. Government debt will comprise more than 70% of the Gross Domestic Product (GDP).

Unforeseen factors, like the Coronavirus and load shedding, will probably contribute to the growth rate being much lower than 0,9%, which will result in a much greater budget deficit and ultimately in more financing costs on debt.

According to the Minister, he aims to cut the government's wage bill with R37,8 billion during this financial year and after that with a total of R160 billion in the subsequent three years. This raises the question of whether Cosatu and other trade unions will allow him to do so. Cosatu already made it clear yesterday that freezing salary adjustments will result in a declaration of war.

The FF Plus agrees that Eskom must be rescued, but money from the Government Employees Pension Fund (GEPF) may not be used for that purpose. Other funds must also not be obliged to invest in Eskom.

The provision made for another financial lifeline to the SAA is unacceptable and unaffordable. The airline must be privatised as it costs taxpayers billions of rand every year while it has no benefits to show for it.