Home | Latest news | Onslaught against André de Ruyter: The danger of trying to save the sinking “Titanic”

Onslaught against André de Ruyter: The danger of trying to save the sinking “Titanic” 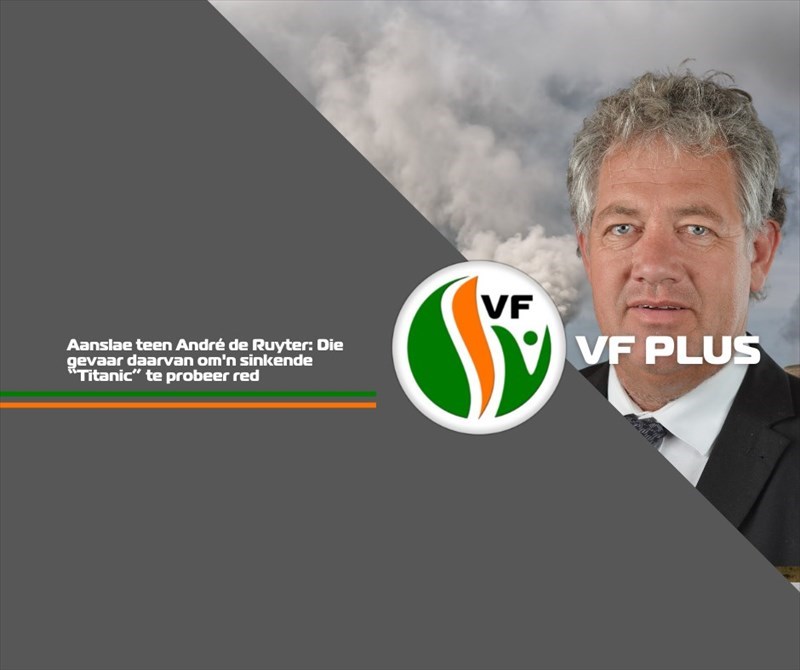 Suppose a new helmsman took charge of steering the Titanic after it had crashed into the iceberg – who would be to blame for the disaster? Would one be justified in criticising the new helmsman for not knowing enough about sailing?

Questions like these inadvertently arise when influential South Africans try to lay the blame for the current power crisis on Mr André de Ruyter. In contrast, the FF Plus wants to reiterate its support for the chief executive officer of Eskom.

Mr De Ruyter took over as Eskom's chief executive officer in January 2020. That was long after the most disastrous decisions had already been made. The Department of Mineral and Energy Affairs warned as far back as 1998 that Eskom's power provision will only be sufficient until 2007 and that investing in new generating capacity is absolutely essential. At the time, the government believed that the private sector must see to it.

In 2007, South Africa was hit by two disasters: The first was the implementation of load shedding and the second was that construction on the Medupi and Khusile power stations had commenced. These two power stations were meant to put an end to load shedding once and for all, but due to technical and design flaws as well as extreme overspending, they have still not been completed.

In the meantime, the routine maintenance on older power stations was neglected and as a result, approximately half of the installed generating capacity is out of order at any given time.

It became evident in the Zondo Commission's inquiry into state capture that Eskom was one of the looters' favourite targets. Not only was the number of managerial positions increased to far beyond any functional level, but irregular and even damaging contracts were also entered into.

Maintenance was further neglected because load shedding was being avoided by keeping generating units in operation without conducting any maintenance on them for extended periods of time.

So, when De Ruyter took over at Eskom in January 2020, the damage to the institution's technical core function had already been done. In addition, the administrative and management functions were overloaded with employees who contributed very little to the company's functioning, but contributed greatly to its expenses. In any underperforming enterprise, those are the people who most strongly oppose attempts at turning things around – and who have the ability to take revenge.

The current Minister of Mineral Resources and Energy, Mr Gwede Mantashe, appears to want to lend a hand with so-called emergency power contracts. Some of these contracts, particularly with Karpowership, create suspicion seeing as it will impose a 20-year contractual obligation on the country for something that is meant to be a short-term "emergency solution". According to media reports, though, Mantashe will not hesitate to openly declare that De Ruyter does not know what he is doing.

Another view that the FF Plus and De Ruyter share is that South Africa must start moving away from coal-based power generation, but that it must be a gradual process. Also that Eskom's distribution network must be expanded to allow distributed generation and storage so that renewable energy can flow to consumers.

Signs of possible sabotage and negative statements by important role players, like Mantashe, raise concern about whether De Ruyter might lose the political support that he needs to resolve the power crisis.

At best, it will leave South Africa in the hands and at the mercy of average to poor officials. At worst, criminals may end up wielding the sceptre.

The FF Plus is encouraging consumers, both domestic and in the trade and industry sectors, to start making plans for generating their own power. Renewable power generation is already significantly cheaper than conventional sources – during certain favourable times – and storage technology seems to be following the same positive cost trajectory.

For decades, Eskom was the industrial heartbeat of South Africa. But within the next decade or two, decentralised power supply could take over as it may very well be the only reliable source of power.

Concerning André de Ruyter, he took over at the wheel long after the Eskom-Titanic had crashed and started to sink. And if he is unable to save it from going under, he will forever deserve credit for trying his best.