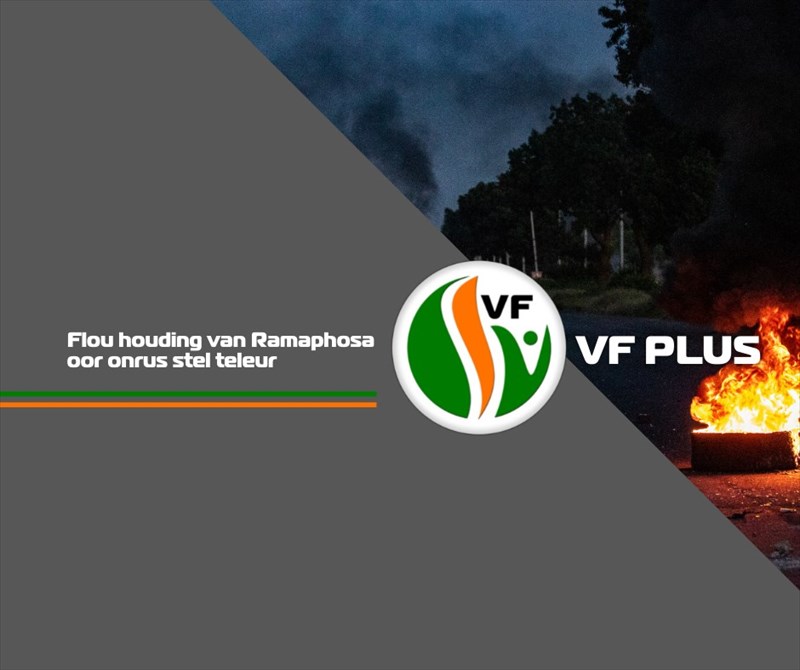 The FF Plus will fully support any and all attempts at halting the current wave of anarchy and violence sweeping across the country. In the party's view, though, it is a big problem that President Cyril Ramaphosa is constantly taking reactive instead of proactive action.

He stated that the country's various police intelligence structures and the defence force will cooperate on national level. It is, however, too little too late.

These services have already failed the people, despite all the warning signs that have been evident since last week Wednesday and that have foreboded what is currently unfolding in the country.

Another problem is the fact that the last time the President engaged with other political leaders to discuss the serious challenges associated with the Covid-19 pandemic was last year in May. Why wait more than a year before doing it again?

The FF Plus is calling on the President to listen to what political leaders and other role-players have to say so that the country's problems can be tackled and overcome together.

While President Ramaphosa demonstrated an apparent indifferent attitude towards the unrest, which may result in countrywide anarchy, while addressing the nation tonight, live television footage showed shopping centres being looted with not a single police officer or member of the defence force on the scene.

It raises questions about the government's ability and political will to defuse the volatile situation in KwaZulu Natal and Gauteng before it spills over to the rest of the country. Swift and decisive action is needed to prevent it from spreading.

The FF Plus finds it extremely disappointing that the President offered reasons, such as unemployment and poverty, as plausible excuses for the extensive looting.

It is unacceptable. The actions of the rioters come down to nothing but criminality.

The FF Plus is once again calling on the people to remain calm and not to take the law into their own hands.

RT @MagnusHeystek: Foreign investors have been pouring out of JSE since 2015 (as per graph). The ANC's policies have chased them away and t…