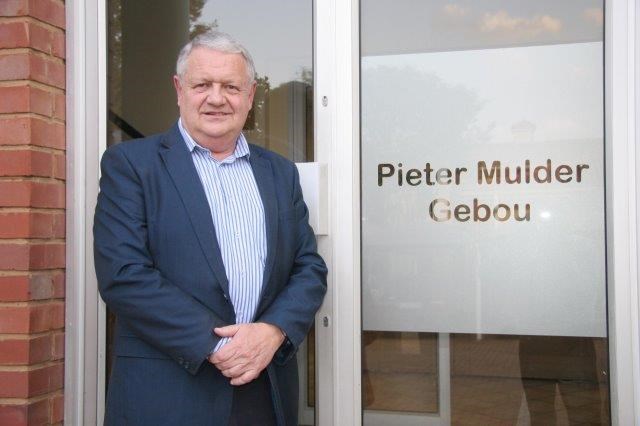 At the weekend, the FF Plus’s head office in Highveld, Centurion, was named after the former leader of the party, Dr Pieter Mulder.

Dr Mulder was one of the founding members of the then Freedom Front and was elected as the first chairperson of the party. He went on to become a Member of Parliament (MP) for the Freedom Front after he had been an MP for the Conservative Party (CP) since 1988.

In April 2001, Dr Mulder was elected as the leader of the Freedom Front and he served in that position until November 2016. He served as MP until 30 November 2017, which made him the longest continuous serving Member of Parliament in South Africa at the time.

Apart from the fact that he is a seasoned politician, Dr Mulder is also a skilled communications expert. In 1978, at the age of 26, he obtained his doctorate in Communication Studies at the then PU for CHE in Potchefstroom. In 1981, he completed his post-doctoral study on international communication at the University of Wisconsin in Madison, America.

During his brief academic career, which he quickly exchanged for politics, Dr Mulder was appointed as a lecturer of Communication Studies at the PU for CHE in 1984. In the same year, he was elected as the vice-president of the South African Communication Association for lecturers. In 1985, he was promoted to professor as well as Head of Department for the Communication Studies Department at the University.

Dr Mulder wrote a book on his political career entitled ‘Kan Afrikaners toyi-toyi?’ – which is characteristic of him as he has the ability to present often highly charged topics with some humour. It is also clearly evident in the introductory paragraph of the book’s foreword, which reads:

“Afrikaners create the impression that they are sick and tired of politics and are done with it. I, however, experience quite the opposite. My wife and children do not want to go shopping or to Aardklop with me, because they complain that ‘dad gets held up by strangers who want to discuss politics with him and then shopping just takes so much longer’”.

Dr Mulder is passionate about astronomy, computers, reading and particularly Afrikaner history and he has taken many guests on a guided tour of Parliament.

Nowadays, he is a political commentator, but he still finds time to express his love for Afrikaner history by taken groups of young people on tours through places like the Voortrekker Monument and in this way, he shares his vast knowledge of the history.

In the speech he delivered at the naming ceremony of the building, the leader of the FF Plus, Dr Pieter Groenewald, honoured the political vision and zeal exhibited by Dr Mulder.

He said that the building is a tangible symbol of Dr Mulder’s ability to plan for the future as it was his idea to purchase the building at the time. The building has since been paid off and is a secure asset for the FF Plus.

Dr Groenewald also shared anecdotes from the early years of the party to illustrate Dr Mulder’s passion for his work. Like when he climbed on a ladder long after midnight to hang party posters on lampposts during election times.

Homage was also paid to Dr Mulder’s spouse, Triena Mulder, who was the silent drive behind Dr Mulder’s political career. Her support of Dr Mulder is particularly evident in the fact that even though she was an excellent maths teacher and Head of Department in 1988, she was willing to sacrifice everything and move to Schweizer-Reneke, where Dr Mulder became a member of the Volksraad for the constituency.

The FF Plus says: An executive mayor should be held accountable in a more effective manner and the municipal counci… https://t.co/7DEAVTFZLB

RT @RefilWest: In interest of thriving democracy 5TH LARGEST party, @VFPlus was my favourite interview this cycle. Not endorsement, but I…