FF Plus questions to ministers highlight decline of municipalities 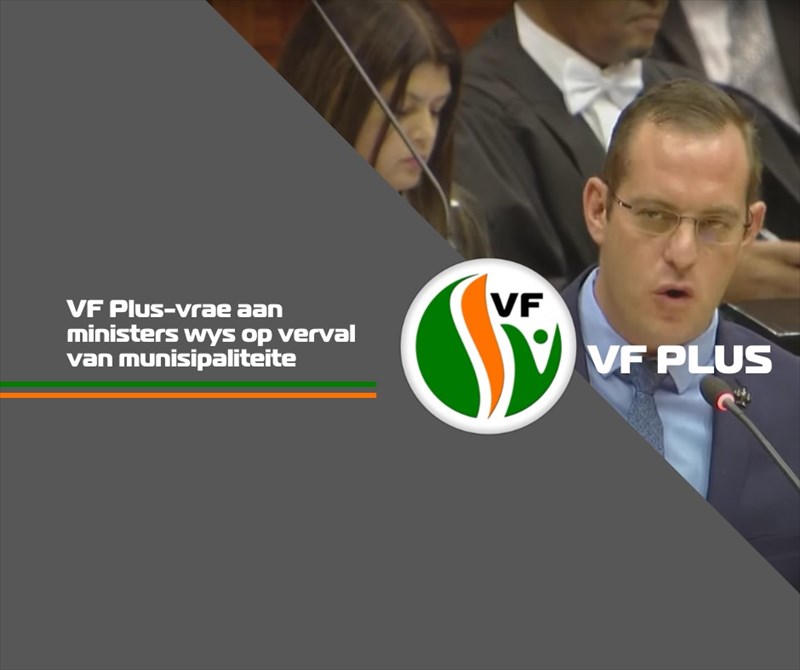 The decline of South African municipalities, and the role that ANC infighting plays therein, is an alarming reality. The responses to questions that the FF Plus addressed to, among others, the Minister of Cooperative Governance and Traditional Affairs (COGTA) have confirmed that the situation is so dire that crisis management has largely supplanted normal service delivery.

Furthermore, only 10% of those municipalities that have such plans (45%) implement them fully, which comes down to less than 5% of all the municipalities in the country.

According to the Municipal Financial Management Act report by the Auditor-General (AG), 41% of audited municipalities do not have approved policies on routine maintenance of water and sanitation infrastructure, while 27% do not have any road-maintenance plans.

This means that the roads of a third of the country's municipalities are decaying, with no maintenance plan in place.

In response to a question regarding the steps being taken to address the negative impact of political infighting on service delivery, the Minister admitted that it certainly does have a negative impact on the ability of municipalities to perform their functions, however, it seems that nothing is being done about it.

The Minister merely provided a vague response about what ought to be done to put an end to the infighting along with a list of councillors' duties. This response is absolutely meaningless and serves as proof that the ANC has no plan of action in place to curb the infighting in its own ranks, which has already claimed a number of lives.

The response to a question regarding the issue of specialised expertise, including appointing engineers for each respective division on local government level, revealed that there are presently 53 technical director vacancies at municipalities countrywide.

The answer to the question of how these shortcomings will be rectified indicates that local authorities are not legally obligated to employ qualified and registered mechanical, electrical, civil and chemical engineers.

According to the Minister, each local authority follows an approved organisational structure to appoint skilled persons in compliance with applicable regulations and requirements.

The FF Plus views this lack of skills as a significant contributing factor to the decline of infrastructure that can be predominantly attributed to the consequences of Affirmative Action (AA), which has a direct, detrimental impact on service delivery.

In regard to the safe disposal of hazardous and domestic waste, the FF Plus addressed a question to Ms Barbara Creecy, Minister of Environmental Affairs, Forestry and Fisheries, enquiring about the number of municipalities in each province that applied for and received licences for the treatment and disposal of hazardous waste in terms of the National Environmental Management: Waste Act.

After the more pressing issues of water, power and sewage, waste disposal is considered the next biggest timebomb. It poses a serious threat to life and the environment. In addition, the accumulation of waste at, among other places, chemical and metal plants only exacerbates the problem.

The shocking response to this question revealed that only two municipalities in South Africa have applied for such licences. This is another inevitable disaster unfolding right before the ANC government's very eyes. It seems that their only plan is to stand idly by and look on until it becomes necessary to do crisis management.

The ANC is busy ruining South Africa on local government level. On 1 November 2021, all South Africans must make use of the opportunity to stand up with the FF Plus and put an end to the decline under ANC rule, before it is too late.