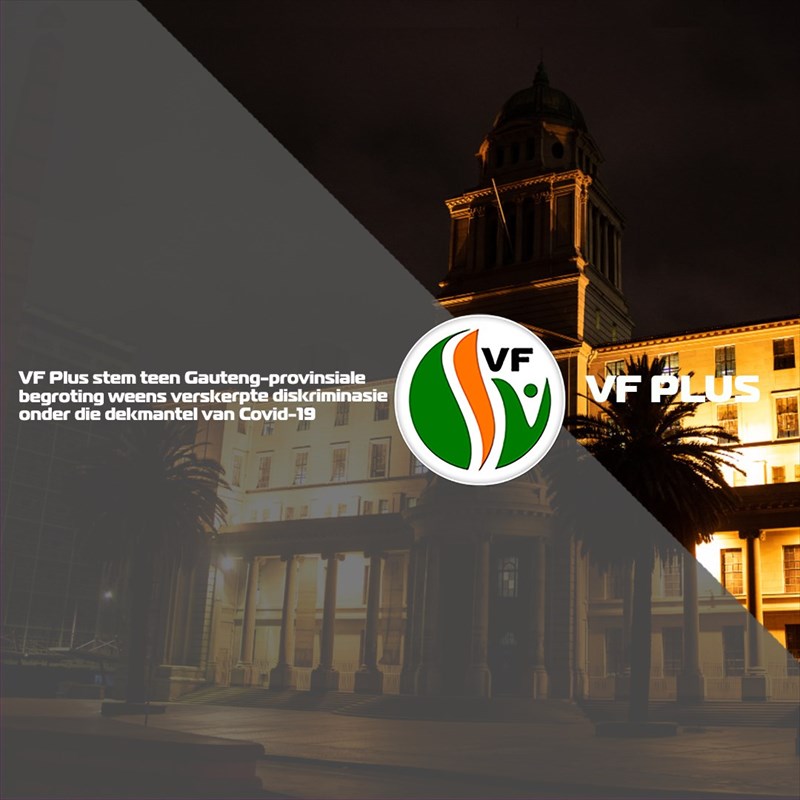 The FF Plus voted against the Gauteng provincial budget today because it is tainted by racism.

The previous budgets had the same shortcomings, but now the ANC government has intensified its racist policy on national and provincial level under the guise of limiting the effects of Covid-19 and the lockdown.

In effect, the ANC has started wielding Covid-19 as a weapon to de jure discriminate against white people and de facto against coloured and Indian people.

When lockdown commenced, most South Africans accepted the first phase as necessary to give the government the opportunity to prepare for dealing with the pandemic.

Most South Africans co-operated willingly and deserve to be commended for that. In Gauteng, political party leaders frequently met with the Premier to discuss and help manage the pandemic. For a brief moment, the hope was ignited that for the very first time since the new dispensation started, we could fight a common enemy together, that we could have a more pragmatic approach to policy and implement plans that will really work and not just blindly pursue some flawed ideology.

That hope, however, soon faded as the ANC government – typical of its centralist nature deeply tainted with Sovietology – regressed to the mean by implementing policy characteristic of governments that have destroyed their countries, like Zimbabwe, Venezuela, Cuba and North Korea.

And it was not long before the acting MEC for Social Development, Panyaza Lesufi, attempted to centralise food aid so that the government alone could determine who would receive food parcels and who would not.

It conjured up disturbing images of the man-made famines of Russia, the Ukraine and China under the leadership of communists who bow worshipfully before the concepts of social engineering.

It is also interesting, and very important, to note who had received food parcels according to the report that Lesufi supplied to the FF Plus. The report provides a demographic record which indicates that only black and coloured people received food parcels despite various undertakings that everyone will be helped.

No white or Indian people are mentioned in the report. The FF Plus has asked whether the report is indeed accurate in a written question. In so, the implications are far-reaching as it would mean that the Gauteng government did indeed discriminate against certain people and that the fear for centralisation was justified.

Lesufi abandoned his centralist policy after pressure was put on him by various role players, including the FF Plus that sent an official letter regarding the matter to the Premier. The issue was resolved in the subsequent Premier's meeting.

Apart from the unfair distribution of food aid, the FF Plus also noticed that small business enterprises that apply for aid from the newly established Gauteng Small Business Fund are undermined by the ANC government by way of its fine print, which gives preference to small business enterprises in the informal sector and settlements. So, everyone could apply for aid, but you will only receive aid if you have the right skin colour. Like businesses with white owners do not employ black workers.

Numerous Gauteng ANC members echoed their national peers by saying that Covid-19 is an opportunity to drive radical economic transformation to its logical conclusion and in doing so, they are all marching in step to the creation of yet another failed communist dystopia – this time in South Africa.

And therefore, the FF Plus will oppose the ANC's budgets that fund its policy and will do everything in its power to fight against the ANC's implementation of its utopian dreams for a doomed-to-fail communist state.