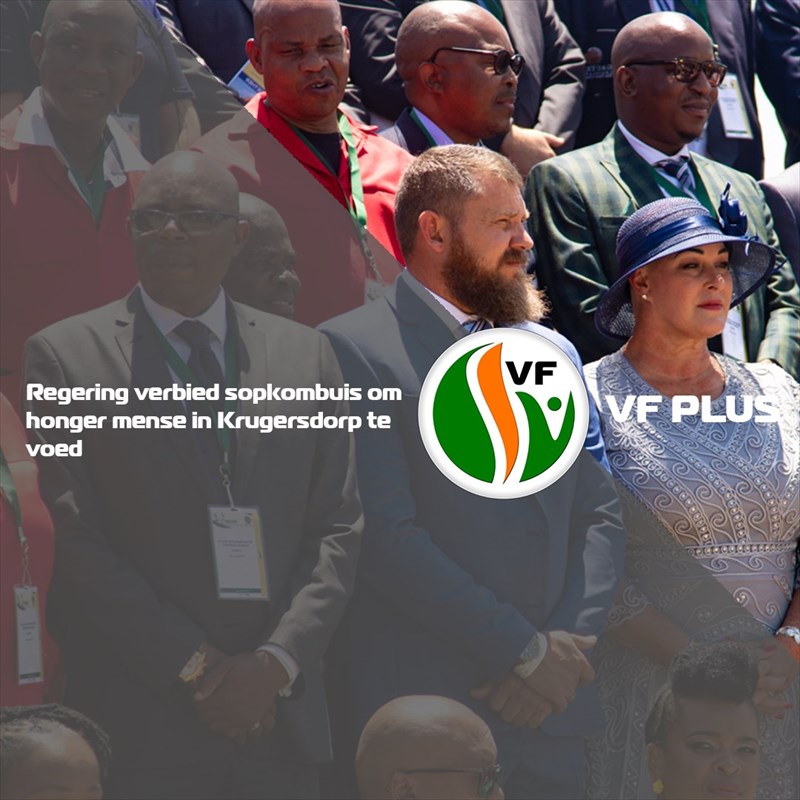 The FF Plus has urgently requested the acting Gauteng MEC for Social Development, Panyaza Lesufi, to intervene after the illegal closure of a homeless shelter and soup kitchen in Krugersdorp that feeds more than a thousand hungry people every day.

The West Rand District Municipality even went so far as to instruct the police to send police officers to the soup kitchen to ensure that it does not distribute food.

These actions are not only inhumane and scandalous, but also unconstitutional seeing as the institution, Cradle of Hope, did obtain permission from the Department to provide food to those in need.

Volunteers use approximately 500 loaves of bread and 50 kg of peanut butter every day to make the sandwiches which they then distribute to the people, who wait in long ques in front of the centre from as early as ten o'clock in the morning. Many of them are toddlers and this is their only meal for the day.

Just over a week ago, the FF Plus identified various legal and practical flaws in the guidelines for the centralisation of food aid and the party took these up with the Gauteng Premier, David Makhura. It is imperative for the government to realise that the regulations and prescribed actions in terms of the Disaster Management Act are still subject to the Constitution.

The guidelines are most probably unconstitutional seeing as they are in contravention of Section 11 of the Constitution which guarantees the right to life – a non-derogable right – and Section 27(1)(b) which guarantees access to enough food and water.

Should the Gauteng ANC government's actions put someone's life at risk in any way, it would be unconstitutional. A case can be made that death due to starvation is a greater probability than death due to Covid-19.

Given the problems currently experienced by the Gauteng government to get food parcels to the needy quickly enough, the centralisation of emergency food aid will only make things worse and result in many more people dying of starvation-related causes.

The private institutions and community organisations that truly understand the specific community's needs and can generally respond faster and more effectively could be prevented, either arbitrarily or by the Department of Social Development's administrative red tape, from intervening where there exists real need.

The FF Plus cannot look on as the people who have lost their jobs due to the lockdown now starve to death. The government's callousness is getting out of hand, its food programme is failing miserably and it does not reach those in need fast enough.

The party will keep the pressure on Lesufi to allow soup kitchens, that have obtained authorisation from the Department of Social Development and comply with all the requirements to distribute food, to help those who need it most.