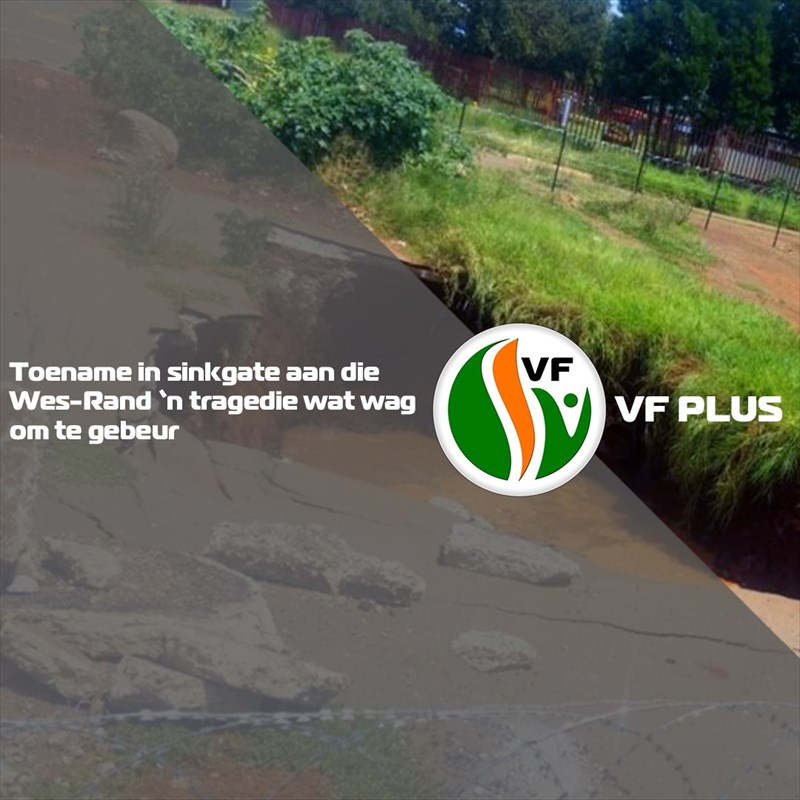 The disconcerting increase of sinkholes on the West Rand is the prelude to a disaster waiting to happen.

During a recent oversight visit that the Gauteng Legislature's Portfolio Committee for Cooperative Governance and Traditional Affairs (COGTA) paid to the West Rand, it became evident that the situation deteriorated significantly over the last few weeks. In Khutsong, just outside Carletonville, there are five sinkholes dangerously close to two schools and numerous family homes.

The Portfolio Committee and provincial disaster management are jointly responsible for the implementation of an integrated and comprehensive disaster management plan, which includes providing alternative housing and schools to the affected communities.

Various residents who reside on the edge of one of the largest sinkholes have indicated that they do not want to give up their large houses for smaller, less expensive houses.

The municipalities on the West Rand do not have the necessary funds to rehabilitate the sinkholes and rely heavily on financial aid from the Gauteng province and national Treasury.

During the oversight visit, the FF Plus enquired whether impact studies were conducted to determine if the area is safe for high-density housing and also whether any of the house owners submitted building plans for their houses. It is the local government's responsibility to conduct the necessary impact studies so as to prevent disasters.

Years’ worth of poor and inadequate underground infrastructure maintenance is one of the main contributing factors to the current crisis.

The Mogale City Local Municipality (Krugersdorp) is also guilty of non-compliance with municipal regulations with the building of a settlement on dolomite-rich land. The settlement is currently being built on an old quarry, but there are no proper services nor networks in place. The houses are built no more than two meters apart which puts even more pressure on the unstable soil formation and that makes a future disaster inevitable. The recent heavy and continuous rain only makes matters worse.

The FF Plus will hold the ANC government accountable should there be any loss of lives in their desperate scramble to gain votes, particularly so soon before an election.

The party recommended that the millions of rand that will be needed to rehabilitate the sinkholes should instead be used to identify suitable areas where proper and sustainable housing can be built.